The  BIPM (Bureau International des Poids et Mesures, Paris) has the responsibility to compute the TAI (International Atomic Time). The TAI corresponds to a weighted mean of about 500 atomic clocks situated in about 80 laboratories in the world. One of these laboratories is at the Royal Observatory of Belgium.

As the Earth rotation is much less stable than the atomic clock, the solar time will wander away from the TAI. For practical purpose, it is necessary to keep a precise time definition that stay very close to the solar time. For this reason, the UTC (Coordinated Universal Time) was introduced in 1971, it is obtained by adding the so-called leap second if necessary, i.e. if the disagreement between the Earth rotation and UTC becomes too important, in order to keep the difference between UTC and the Earth rotation time scale lower than 0.9 second. The local time is obtained by adding to UTC the time zone correction of the location, and an eventual summer time correction.

Each time laboratory maintains a physical realization of UTC, i.e. a clock (or a set of clocks) synchronized to UTC and of which the frequency is adjusted on the UTC frequency. This realization is called UTC(k), where ‘k’ is the acronym of the laboratory. For the Royal Observatory of Belgium, it is UTC(ROB).

The clocks participating to TAI must be compared each other. In a same laboratory, the clocks are regularly compared to UTC(k) using a time interval counter which measures the time delays between the pulses (one pulse per second) of the clocks and the pulses of UTC(k). For clocks located in different laboratories, two techniques are used: the measurement of a two-way signal going from one laboratory to the other through a geostationary satellite, and the common view of GPS satellites. Only this latter is used at the ROB; it consists in:

Calculation of EAL and TAI

Finally, the BIPM computes, from all local clock data compared by either two-way or common view, a « Free Atomic Scale » (or in french, Echelle Atomique Libre, EAL), based on an ensemble algorithm, in which the weight attributed to each clock is determined from its long term stability. This weighted average is then combined with an ensemble of primary frequency standards (very precise atomic clocks which directly realize the definition of the second.) developed in some laboratories, in order to obtain the TAI second as close as possible from the official definition of the second

The TAI is therefore determined a posteriori: the clocks needs first to work in order to provide data that will be sent to the BIPM which will make the computation of TAI a posteriori.  The BIPM informs the timing community, each month for the previous month, about the status and evolution of each UTC(k) with respect to UTC. Consequently, each timing center knows how well it predicted UTC and what was the difference between its UTC(k) and the official time UTC, and from that, readjusts the frequency of UTC(k) if necessary, i.e. if UTC(k) goes away from UTC. 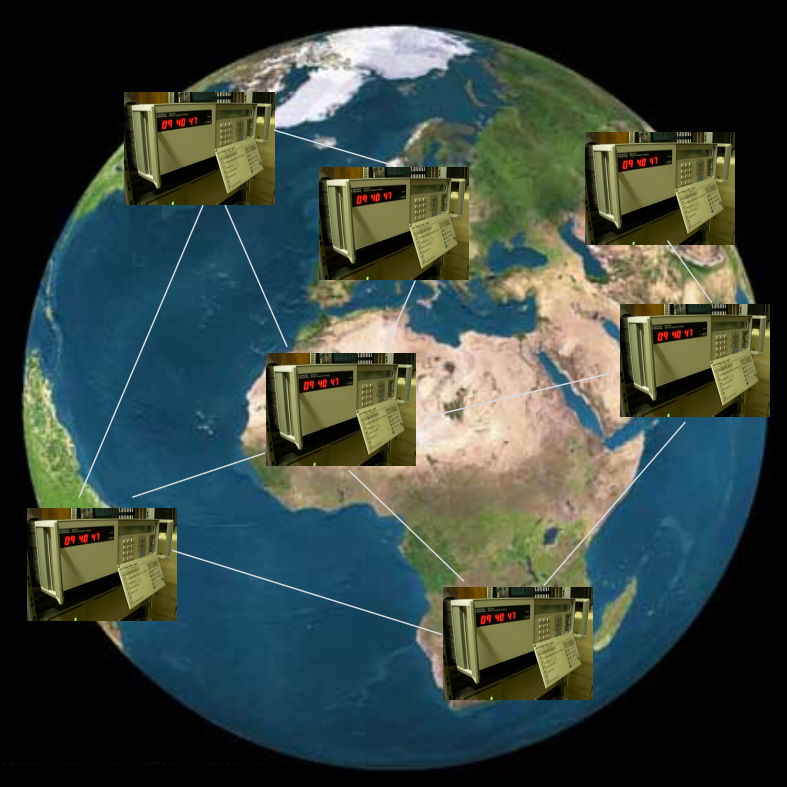 Illustration of the calculation of EAL and TAI